We all have a role to play to normalise HIV testing, treatment and prevention
914
post-template-default,single,single-post,postid-914,single-format-standard,bridge-core-2.5.1,ajax_fade,page_not_loaded,,qode-title-hidden,hide_top_bar_on_mobile_header,qode-theme-ver-23.6,qode-theme-bridge,wpb-js-composer js-comp-ver-6.4.1,vc_responsive,elementor-default,elementor-kit-28 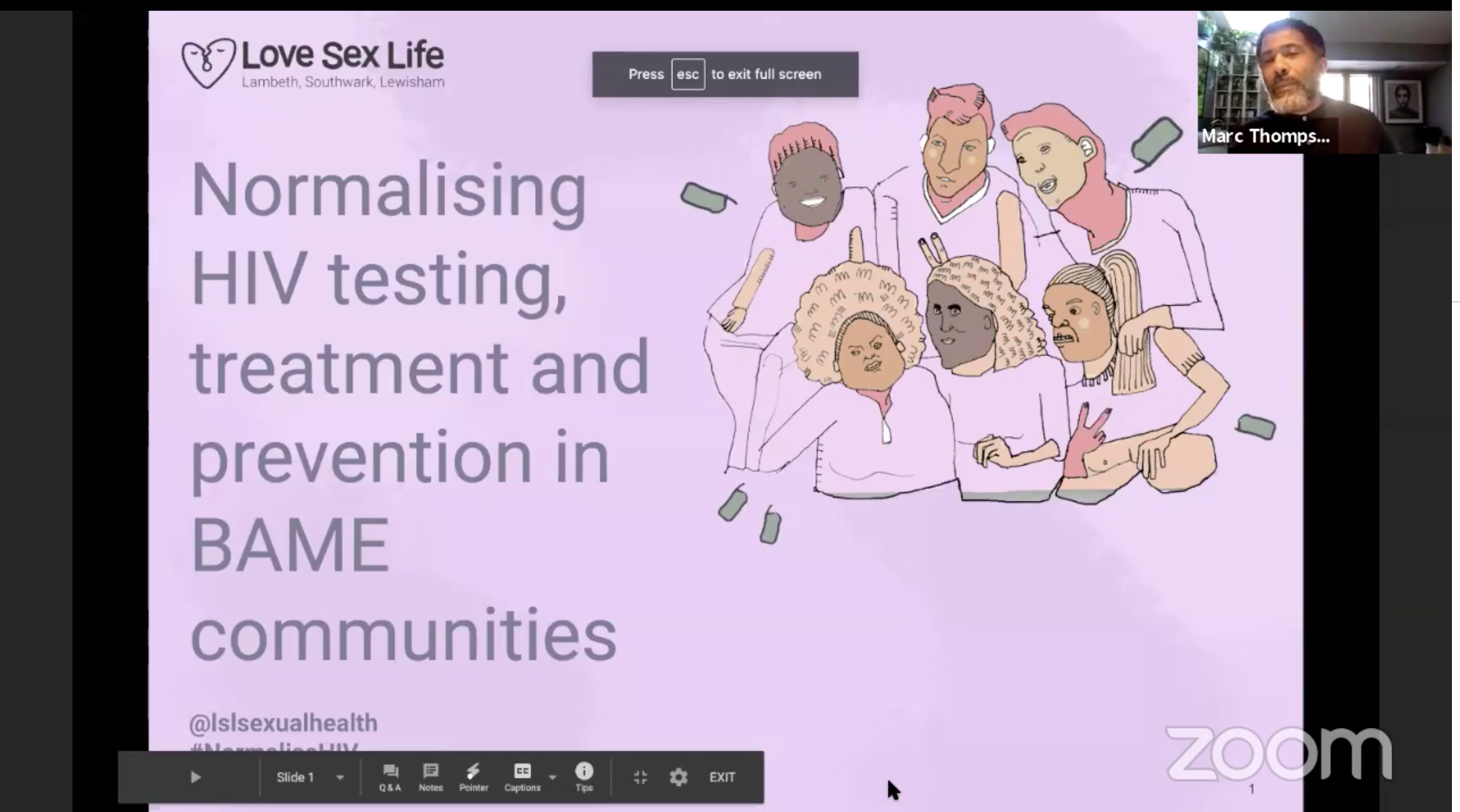 25 Feb We all have a role to play to normalise HIV testing, treatment and prevention

The boroughs of Lambeth, Southwark and Lewisham face some of the greatest sexual health challenges in the country. Together, they have the highest rate of diagnosed HIV in England, with 8,700 residents diagnosed with HIV. And while HIV diagnosis rates are falling across the boroughs, there remain some significant inequalities of concern.

There are still people living with HIV who are unaware of their status, with the highest level of late diagnosis amongst women of Black African ethnicity in their 50s and 60s. And late diagnosis can significantly impact a person’s health, weakening their immune system and leading to other illnesses. We also know that a disproportionate number of HIV cases are being diagnosed for people living in the most deprived areas of the boroughs.

So how do we begin to address this? To commemorate National HIV Testing Week, Love Sex Life convened a webinar to explore how to normalise HIV testing, treatment and prevention for our communities.

Chanel Noel, Head of Programmes at Blueprint For All, moderated the session and introduced the panel, with Marc Thompson,  co-director of The Love Tank and founder of PrEPster, an initiative that educates and agitates for PrEP access, Dr. Vanessa Apea, a Consultant Physician in Sexual Health and HIV Medicine at Barts Health NHS Trust and Jason Okundaye, journalist and writer from South London, who focuses primarily on LGBT+ issues, masculinity and racism.

How can we begin to educate around HIV?

Exploring the role of education in addressing HIV stigma and dispelling myths, the panel emphasised that from a communications perspective it was important to reframe the way we talk about who is at risk of HIV to include shifts in diagnosis.

Here, the emphasis was on the fact that anyone can be at risk; as long as you are having sex, there is a possibility that you may be exposed to the virus. Historically, communications have focused on men having sex with men (MSM) and more recently young people, so this could be affecting who is getting tested or seeking treatment.

Similarly, Dr Vanessa Apea highlighted that the majority of people accessing PrEP (pre-exposure prophylaxis medicine that reduces the risk of getting the virus for HIV negative people) were white, gay men. She argued that it was a failure in health promotion that Black communities were not taking it, and suggested that it might be because they simply don’t know about it, or how to access it. Communications must be representative and inclusive of Black communities, and highlight that anyone, regardless of sexuality or lifestage, is at risk of HIV.

How can we address HIV stigma on a community-level?

Marc Thompson, as someone who is HIV+ and who advocates for HIV, reiterated the need to empower those who are also HIV+, giving them the tools and information they need to address their self-stigma and push back on stigma they may encounter from others. He spoke of the need for allies, from both the wider community and community leaders, to come forward and address stigma where and when they see it. Finally, he argued that we need to better utilise the power of facts in dispelling myths and speaking about the reality of HIV today, that ultimately, with treatment, you can live a healthy, long life and not pass on the virus to others.

“It’s important to remember what stigma does, stigma creates fear, stigma stops people doing something that can enable them from having a good quality of life. If you as an individual can make a difference, know your power in that.”

And what about the role of the media?

Journalist Jason Okundaye raised a powerful point about the role and responsibility of the media in helping to shift the way HIV is perceived. By painting a real picture of the people that experience HIV and the advancements in HIV prevention and treatment, we can potentially overcome some of the barriers that prevent people from getting a test, such as fear.

In the case of Michaela Cole’s I May Destroy You, one of the most revolutionary TV shows in talking about and framing consent, it failed in educating on HIV by not showing the process of getting or signposting to post-exposure prophylaxis (PEP). PEP is taken after a possible exposure to HIV, through unprotected sex or through injury with an HIV-infected needle. But PEP can only prevent HIV infection if taken within 72 hours of exposure, making it even more important to raise awareness about using it and where you can access it.

HIV prevention and treatment technologies mean that people living with HIV can live a long, healthy life. But as a sector, we need to ramp up efforts to reach those in our community who need it most, highlighting the advancements and availability of these medicines. But to do so means addressing stigma, which as our panellists urged, is everyone’s responsibility; ‘it’s not just about reforming sexual health clinics, it’s about reforming everything.’

This website uses cookies to improve your experience while you navigate through the website. Out of these, the cookies that are categorized as necessary are stored on your browser as they are essential for the working of basic functionalities of the website. We also use third-party cookies that help us analyze and understand how you use this website. These cookies will be stored in your browser only with your consent. You also have the option to opt-out of these cookies. But opting out of some of these cookies may affect your browsing experience.
Necessary Always Enabled

Any cookies that may not be particularly necessary for the website to function and is used specifically to collect user personal data via analytics, ads, other embedded contents are termed as non-necessary cookies. It is mandatory to procure user consent prior to running these cookies on your website.